Keep yourself away from the risk of Binge Drinking 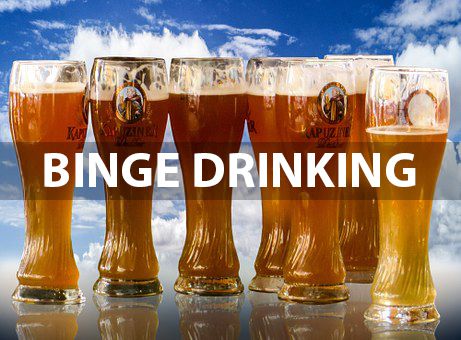 It’s December and yay the party time of the year is back. The week from Christmas to New Year is the time where a lot of social gatherings and public events happen and people drinking alcohol is very common. While many of them consume alcoholic beverages responsibly, binge drinking has become common nowadays among people from all ages.

What is binge drinking?

Binge drinking is where a person drinks alcohol until he/she is totally drunk or intoxicated and this increases the risk of violence, leading to injuries many a times. It is also associated with numerous health conditions, which would result in both emotional and economical costs. Drinking 6 units of alcohol in a very short span, say about an hour, would increase the blood alcohol concentration level. But drinking the same amount over several hours, as well as eating food, would incur a less effect on one’s blood alcohol concentration (BAC).

Some of the numerous consequences include:

·Unsafe sex, which risks the changes of sexually transmitted diseases

·Alcohol consumers should be aware of how much alcohol can be consumed safely, and they should start limiting themselves, considering the further consequences.

·It’s always recommended not to refill the half empty- glass, as it’s difficult to keep a count on the amount of alcohol consumed.

·Alcoholic consumption has to be spaced in-between by having a glass of water or soft drinks.

·It’s always advisable to avoid party fun games like “rounds” or “shouts”, as this encourages the crowd to keep up with the person who is drinking the fastest, and the chances of binge drinking is always high here.

·To avoid excessive alcohol drinking, one has to keep themselves busy by dancing, chatting or having fun, because sitting idle can keep oneself motivated to consume alcohol.

·Planning a party- venue which is alcohol-free is always advisable.

From the concern of better health, it’s always advisable to cut back on alcohol, which in turn helps in improvised health. Cutting down on alcohol is always beneficial to manage your weight, as some drinks contain high calories. Intoxication also leads to a range of

injuries like the one’s associated with drink and drive, showcasing poor behaviour and also risk one’s mental and physical well-being.

Fungal Infections of the Skin and its Resistance – A Rising Menace
Nab Discovering Hands
Importance of pancreas in the human body
Back to home page
Comment on this post
C
Call Girls Jaipur
10/10/2020 08:01
Are you looking for Call Girls Jaipur? Escorts services in Jaipur is here to give you the best sexual services with Hot Girls. Your Dream Girl Available 24*7. Please Contact Now!
Reply
H
Hyderabad Escorts Service
10/09/2020 13:44
Call Girls in Hyderabad are fully prepared for both Service a massage with full sex, most famous Hyderabad escorts at affordable price
Reply